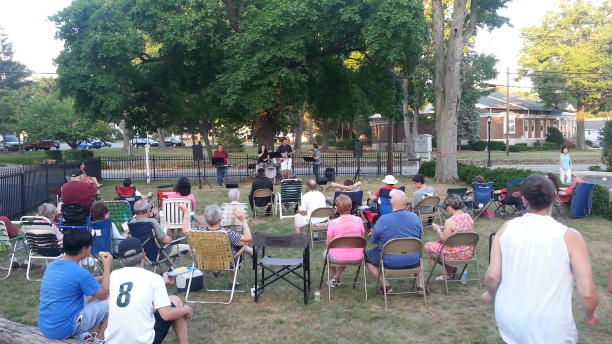 It was a hot summer afternoon. The streets of Midland Park were quiet except for the hushed steps of those returning from work to cool off in their homes. But as the burgers and hot dogs began to sizzle on the grill, the sweet sound of praise and worship began to flow out from the lawn of Midland Park United Methodist Church and into Godwin Avenue. Then, the town seemed to awaken from its long day’s slumber. Through their obedience, the band from Brooklyn brought the Holy Ghost party to Midland Park.

In a town full of churches and worship teams, a visit from an unknown worship band from Brooklyn didn’t make much sense. Even to the band, to journey out to a small town in Jersey during the peak of scorching summer heat in the midst of Friday NYC rush hour was an odd order to fill. “It doesn’t make a whole lotta sense. But if one person gets to know Christ through our visit, it’s all worth it,” said Frank Lucenti, the worship leader of Helping Hands as he prepared for the long trip to Midland Park.

Little did Frank know that his words were prophetic, like the words of ancient prophets whose words were spoken in order for God to fulfill them. And ever faithful are his words, God gathered his people to the Great Lawn of MPUMC for the second Summer Outdoor Concert. Among the invited, there were passersby who stopped to get a drink of water and decided to stay for a burger cooking on the grill. Some were drawn to the ruckus of what sounded like a small block party. No matter what the reasons were for their coming, those who accepted God’s open invitation stayed for the open worship of their God. There was praise. There was prayer. There was proclaiming of the gospel. Through it all, there was an encounter with the Father. For some it was meeting God for the first time. And for some it was a much needed re-acquaintance with their Lord and Savior. For what God had prepared, the trip from Brooklyn seemed brief and painless.